I International Youth Theatre Forum of the CIS, the Baltic States, and Georgia

The First Youth Theatre Forum came to an end in Chisinau on June 13, 2012. At the solemn closing ceremony held in the Chekhov State Russian drama theatre, the Chairman of the Jury of the Forum, director Adolf Shapiro named the Winners of the Theatre Award of the Youth Theatre Forum:

3rd Prize - Narine Grigoryan (Armenia), director of the production The flight over the city by A. Aslibekyan (Tumanyan Yerevan State Puppet Theatre).

Winners were awarded prizes and diplomas, as well as monetary awards. Earlier the directors of competitive productions were awarded diplomas of the Forum participants.

The jury of the forum especially noted the acting works of Vladimir Snegurchenko (Ukraine) in the one-man production of July by Ivan Vyrypaev and Konstantin Hareta (Moldova) – the actor playing the title role in Richard III, and awarded him the prize for the: “concern about modern theatre" young critics-participants of the Forum awarded the production Phonebook directed by Vidasa Barekis (NO THEATRE, Vilnius, Lithuania).

In the evening of June 13 and 14, the participants of the Forum and spectators from Chisinau saw the performance The Town by the works of Irving and Saltykov-Shchedrin in the production of Vladimir Pankov.

Under the auspices and support of The Intergovernmental Foundation for Educational, Scientific and Cultural Cooperation (IFESCCO) 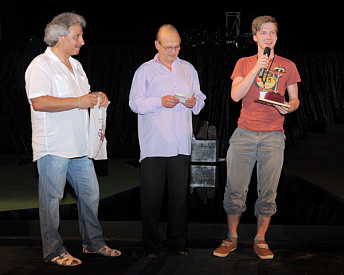