After Anton Chekhov’s "The Seagull" 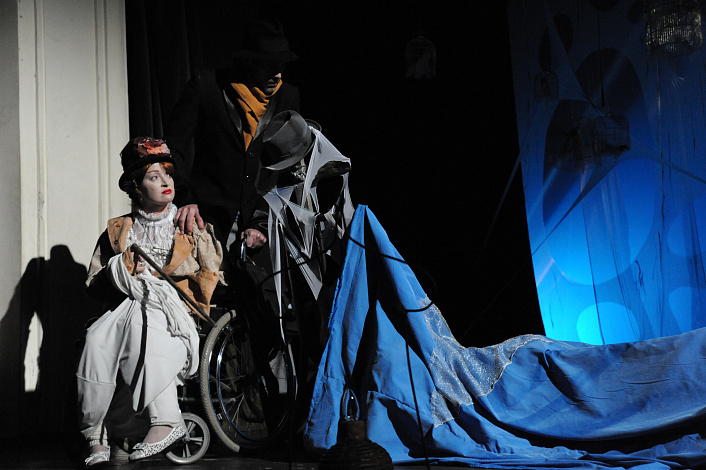 Armen Jigarhanyan’s Drama Theatre (Moscow) The International Confederation of Theatre Associations Chekhov International Theatre Festival With Support of the Ministry of Culture of Armenia and Intergovernmental Foundation for Education, Scientific and Cultural Cooperation of the Community of Independent States (IFESCCO)

I see Chekhov as a mysterious and phantasmagoric labyrinth that keeps luring you in all the time no matter how far away your naïve enthusiasm is taking you. And each time you get lost, which gives you an enormous artistic gratificatio.

Trigorin crosses the stage pushing a wheelchair sitting solemnly wherein is a rather faded version of Arkadina who has come back to her estate and to the bewitching lake to prove to herself and all the others that it is she, not Nina, who is the Seagull. In Akop Kazanchyan’s production of “The Seagull” the reality is inextricably interlaced with Arkadina’s play of fancy, and her hate toward the long deceased rival – with repentance to her son who was killed by her jealousy...

The idea the well-known Armenia director Akop Kazanchyan came up with is fascinating. His ingenious composition “I am Seagull” is a kind of sequel to Chekhov’s all too well-known play that as is known ends in Treplev’s suicide. However Kazanchyan decided to fantasize as to how this tragic happening could be taken by his mother...

Although there are two characters, this is essentially a mono-play. Yuri Anpilogov (Trigorin) kind of tactfully lets his partner play the solo. The long monologue pronounced by Arkadina (Olga Kuzina) is intricately composed. The lines from Chekhov’s play elegantly interlace with extracts from Guy de Maupassant (his “On the Water” is being read on “The Seagull”) and Dumas (it is quite possible that in Kharkov Arkadina shone in the part of Maria Gautier). What really matters and what is absolutely evident is that the woman in the wheelchair, an actress to the marrow of her bones, keeps settling the old accounts. She swings her stick and scatters the wretched chairs in a desperate fight with her imagined foe, trying to prove that only she and no one else is the Seagull – the everlasting title character of life and play.