Piece by Josef Nadj for 13 performers 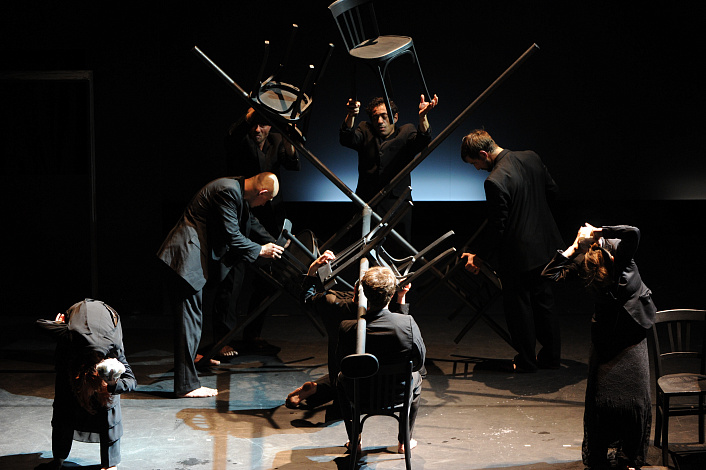 Josef Nadj’s new production reflects the artist’s return to the themes that he in one way or another had been in all he works of the author fr om Comedia Tempio to Sho-bo-gen-zo. It is about time and a period of time, and more specifically about how memory correlates itself with time and tradition and how all this eventually brings one back to his sources. This time it were Anton Chekhov’s short stories and one-act plays that gave the frsh impetus to Josef Nadj’s meditations and creative quests.

Chekhov’s dramatic sketch in one act «The Swan Song (Kalchas)» was written at the turn of 1886 and 1887. The main character Svetlovidov (his name literally translates as “the one who sees clearly) is an elderly actor who found himself alone in an old theatre late at night. Played on that night had been Jean Offenbach’s «La Belle Hélène», a benefit performance, timed for the 45th jubilee of the actor’s career in theatre and in which he appeared as ancient soothsayer Kalchas. Svetlovidov had worked 45 years in theatre but that was the first time he saw the stage at night and he was shocked by the sight of «the black bottomless cavity that looked like a grave where Death herself must have been holing up». He saw the place where the border between reality and illusion had been erased and became shadowy and fuzzy.

The empty theatre was the realm of darkness and ghosts, the space of the «black box» appeared to be both empty and full of memories. This allowed the character to «replay» the other times, digging out from his memory fragments of the past and finding the way to the beyond of his own experience which enabled him to once again «take a drink» from the source of his art. This metaphor is central to Josef Nadj’s new staging

The work consists of many stages, yet I don’t have a tightly ordered scenario. Working with literature I read everything that has been written by and about the author. Schulz didn’t’t write much. On the contrary Antonin Artaud of whom I’m going to make a play wrote abundantly. But the plan of the production will be ready no sooner than I read everything I can find. I like roving through the labyrinth of footnotes and comments and I never do a scenic version of just one particular work. My first ‘literary’ production – Georg Buchner’s Woyzeck – was the most literal translation of the original literary source into the language of the choreographic theatre. But even in that case the storyline of Buchner’s play was not the framework that needed to be coated with theatrical flesh but merely a launch pad for starting off my fantasies. <...>

A drama theatre lacks the variety of forms one finds in dance. It seems that this theatre is just naturally tired and worn out. Or maybe this is the implication of the modern theatre being fed up with the narrative. Nothing like this happens in dance. It is always a free flight of image.

A synthetic production is the source of invaluable collective experience. The spectators whom you don’t know all of a sudden become participators in the show and this makes for the extraordinary fullness of impressions. Even as compared with film which I also love a lot. What we are doing is akin to the poetic language that has its own metaphors and imagery. I tried to record my productions in words and it sounded much like the avant-garde poetry. What’s great about poetry is that everyone finds in it something special for himself.

Joseph Nadj is a most remarkable person in contemporary French modern dance. <...> Nadj heads the National Choreographic Center in Orleans and is a leading figure in the European avant-garde dance. There is a continual dispute between dance and theatre critics as to who should write about Nadj’s works. Calling him a choreographer would be an understatement. It seems to be more appropriate to designate him as the master of visual arts, creator of the metaphorical theatre wh ere personages are images who have come off an artist’s canvases but prefer to stay silent. His more recent works have signs of not so much dance or theatre as of circus. It is a highly astheticized and philosophizing circus. Nadj’s actors are conjurers performing acrobatic stunts or acrobats showing magic tricks. They are the followers of Igor Kio and David Copperfield with well developed muscular systems.