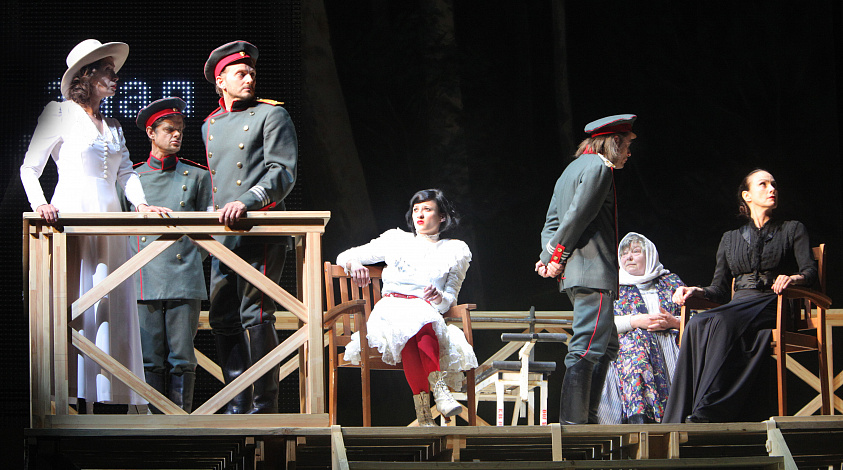 After the October Revolution the new Proletkult movement ostracized Anton Chekhov and banned his texts from the newly founded worker‘s and soldier‘s stages. Their accusation: Chekhov wrote his texts in a bourgeois environment and could therefore exclusively address them to a bourgeois audience. This was deemed harmful to the revolution.

As a matter of fact and contrary to such class liability Chekhov knew exactly – at the latest since his literary sociological journey to the penal colony of Sakhalin – about the situation of the underprivileged, of the poorest of Tsarist Russia. In the astutely observed novella “Peasants”, written in 1897, he presents the Russian proletariat: It swears, drinks, is rough and rugged, analphabetic and uneducated, almost “like cattle”. Even the hope for a better life seems to be a luxury to these people.

Among other places on the Crimea, Chekhov wrote the dramas which until today in equal measure dominate the “bourgeois” theatre in Germany and in Russia. The texts themselves were created in a historical phase of transition and show a country, which freezed around 1900 and awaits change. The nobility still enjoys its privileges, an oligarchy of industrialists and land owners divide the country among themselves. This numbness is also emblematized by the “Three Sisters” Olga, Maria and Irina. A year ago their father, a high-ranking general, died. Now they live at his house in the countryside and long for their home town Moscow. Although the so called pillars of Russian society consort with the sisters at their parlour – they remain unable to overcome their own idleness.

The “Peasants” and the “Sisters” offer two perspectives on the same situation, one as a cosmography of the proletariat, the other as one of the bourgeoisie. In his Moscow production Frank Castorf brings these two perspectives together. The collision of the “class” of the disenfranchised with the bourgeois lethargy leads to the unfolding of a social-revolutionary potential, which Chekhov subliminally drafted as an outlook on the twentieth century and which at least hints at historical events like the October Revolution. Contrary to the Proletkult‘s decrial of him, the work of the author Chekhov can serve very well to answer the question: How to act in the face of social injustice, resistance or assimilation? An equally relevant topic in Germany as well as in Russia

A co-production of Volksbühne am Rosa-Luuxemburg-Platz with Chekhov International Theatre Festival, Wiener Festwochen and Goethe Institute in Moscow