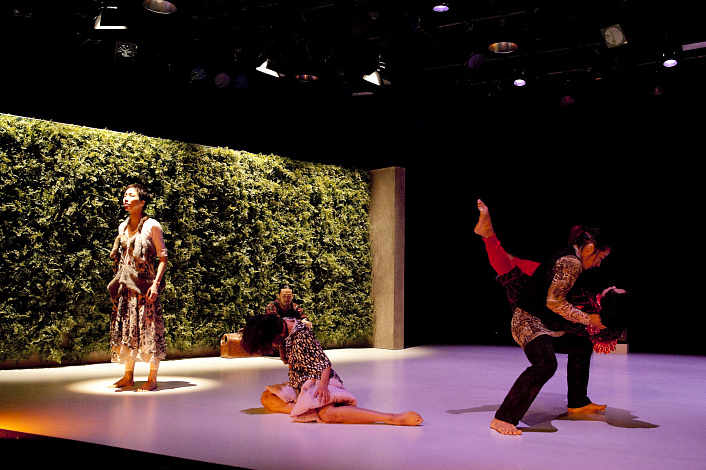 Сhekhov’s story is universal and timeless. But I don’t aim to stage Chekhov’s story, I am to stage Chakhov’s suffer. We all live in Room number 6 and we all have Black Monk inside of us». <…>
The theme of this work is “human drama.” Humans play the role of humans. There is nothing out of the ordinary, no actions specific to a space called the theatrical stage. In the most mundane manner humans play the role of some undefined ‘self’, living a drama staged by a choreographer called Fate. If modern society is indeed a drama where human nature recognizes the ‘self’ by relating to others, how are we to identify and differentiate the ‘other’ from the ‘self’ – as technology dictates everyday life, weakening human bonds and transforming the very act of living into a form of isolation?
Flood of monologues. Incomprehensible events and savage crimes.
Humans existing in isolation, completely detached from the ‘others’.
They repeat creating and playing their own roles, somewhere in their consciousness, and a Black Monk emerges
Jo Kanamori

The key visual image in the production of The Nameless Poison is the mirror wall. It links the characters, first and foremost the Writer, with the landscapes of their minds and with the mysterious outer world that exists beyond their consciousness. The Writer is frantically typing on the keyboard of the computer that becomes another symbol of the forlorn and frenzied creativity the protagonist is swallowed in. The tape-recorder plays Gia Kanchelia’s Lamento and A Serenade for Vocal Part and Cello by Italian composer and cellist Gaetano Braga.
This is precisely the serenade that Lika Mizinova sang in Melikhovo, driving Chekhov crazy. The mysticism of this sorrowful ballad about the ailing girl who in delirium hears the song of the angels coming from heavens but nobody around seems to understand her so the disenchanted girl falls back to sleep eventually inspired Chekhov to write The Black Monk. For some time his character lives an inspired life of “a lunatic, lover and poet” but in the end of the day he gets over it, turns into an average man and dies of unbearable ennui.
For the Japanese choreographer this mystical musical legend (incidentally at some point it inspired Dimitri Shostakovitch) became a clue to the entire story
Alyona Karas, «Rossiyskaya Gazeta»