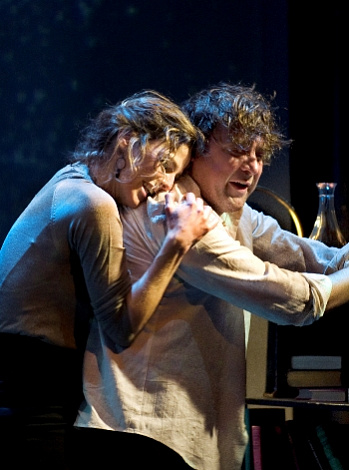 The National Drama Centre (Madrid, Spain) Chekhov International Theatre Festival
“Platonov” is a captivating world in which the characters experience the same existential pains that would torture the more emblematic personages of Chekhov’s great theatre that became a perfect mirror for all the social and cultural prototypes of the late 19th century Russian society. It is the world where the varnished exteriors of the noble society screen off the ghastly hole where human species are devouring each other. It is the world that aspires to exist forever, but is lethally wounded, incurably sick and doomed to vanis.


Juan Mayorga, the author of the adaptation, found the shortest route through this meandering text. He made it shorter and more expressive than the old version that had come out in print several years ago. <…> Gerardo Vera and his actors set a fast rhythm of the performance to the effect that the inner impulse of Chekhov’s play reaches the pitch of a hurricane.


Pere Arquillué plays Platonov who is tortured and whose end is near. His character takes sufferings from life but at the same time he is a seducer. He is counter-pointed by sensual, elegant and beautiful Anna Petrovna, performed by Monica Lopes. She countervails him with this halo of the unattainable and irresistibly attractive imperiousness of a general’s wife…


The enormous work carried out by Gerardo Vera has resulted in an incredible performance, its classical style, beautiful text, the range of existential problems raised therein, the psychological twists and unbridled passions turning out to be quite a shock for the young audiences. It is something that seems to have been long forgotten in the modern worl.


The major troupe came up with a sound and artistically integral interpretation. Each actor, even if playing a small part, is a genius <…> “Platonov” is a highly thought-provoking and thoroughly staged production that, above all, is a discovery of a basically unknown dramatic text