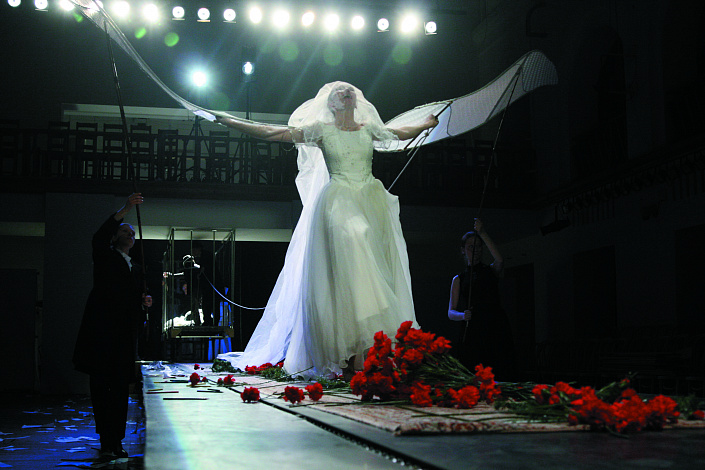 Theatre «School of Dramatic art» (Moscow) Chekhov International Theatre Festival
The man who lived such an unpretentious life and whose death happened to be so clamorous as his body in a casket was taken home in a fright car with oysters, the man who hated platitude and created the world that was so unsteady and yet so solid, so intimate and so huge, would have been pleased to mark his jubilee with the parade of all his personages. Marching from left to right would be masters and servants, writers and actors, conjurers and musicians, stationmasters and military men, doctors and young girls in love, eternal students and businessmen – the present-day owners of the Cherry Orchard, – all these characters and also “lions, eagles and quails, horned stags and silent fish...” And surely the children too...

It would be a beautiful PROCESSION with numerous characters who speak, shout, sing and juggle non-stop all the time. There would be orchestras and choirs, fragments of manorial estates, banners, flocks of migrant birds and seagulls, tea tables with spoons clanking in thecups and finally – a huge freight car designated “Oysters”. <...>

Life and death, beauty and rot, old age and youth...
The last parade of the Napoleonic war veterans, having come to revere
the memory of their Marshal...
The Carnival! Ta-ra-ra boom-de-boom!
A comedy, as Chekhov would have in all likelihood called it.


The line ‘Ta-ra-ra boom-de-boom, I am sitting on a tomb’ in the “Three Sisters” is repeatedly sung by Chebutykin. In this weird combination of sounds and words that is the title of the production one seems to be hearing the beating of a drum and the melody of a march. It precisely reflects (if not defines) the form of ‘the procession’ that was chosen by director Dmitry Krymov. The title also contains the illustration of one of the director’s main ideas: it is not only dialogues and monologue of Chekhov’s plays, stories or satirical articles that can serve as a material for a Chekhovian production. Sometimes a phrase or even one single word is enough.


Throughout the two hours the participants in the performance are juggling with Chekhov’s lines, his characters and symbols. The result is yet another association – the transparency of Chekhov’s drama. Everyone has an orchard he once had to abandon, everyone remembers his nursery and everyone is craving for Moscow. The colored pencils that at some moment are scattered on the stage floor only make this perception more intensive.
In the final moment of the performance the rubber band picks up speed and starts looking like a runway as seen from the window of an airplane. Little by little the mechanical noise dies down and all that is heard are the sounds of the tight and unbroken string.