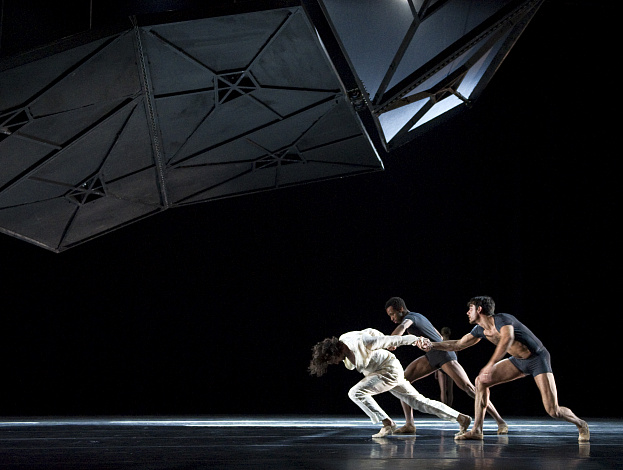 Dedicated to Anton Chekhov on his 150th birthday
Premiered at Teatro Real on February 17, 2010

"The Infinite Orchard" is dedicated to Anton Chekhov. I tried to feel myself inside this man, live the way he lived and feel how he felt about the likes of him and world he lived in. The Infinite Orchard is not based on any particular work. I didn’t want any allusions or story-lines to have an effect upon the perception of this production, which is essentially abstract. I derived inspiration fr om the writer’s artistic world, especially its spiritual component, and fr om his view of the world so that afterwards I could come up with my own vision.

As a musical score I chose in the first plays the four Hymns by Alfred Schnitke, both because this is beautiful music and because I found them to be consonant with Chekhov’s world. In the meantime I asked Pedro Alcalde and Serjio Caballero to think of an original music that would fit in with the general musical architecture of the ballet. In the process of this work the idea sprang up to use extracts from Chekhov’s “Notebooks”. <...> The choreography doesn’t reflect the text in a straight way but makes use of its musicality. In the final phase of the work we added Schnitke’s Holy Hymn for a capella and fragments from Chaikovsky’s pieces as tribute to the composer who was so much admired by Chekhov and some natural sound that we didn’t expect to create any allusions.

The sets designed by Jaffar Chalabi can takes us to all different locales. We can see the outlines of Moscow buildings and steppe landscapes. We can picture the roofs of the houses or slopes of the hills. When the entire structure of the sets is lowered to the stage floor level, the scenic space contracts to create a room, Chekhov’s study, for instance, or a lane wh ere the action of one of his short stories is set. When the structure is lifted we can discern the open spaces of forests and mountains.

Another writer and doctor who was Chekhov’s contemporary, Arthur Schnitzler, referred to human soul as ‘a vast land’. Chekhov spent his life contemplating, depicting and cultivating this land with thoroughness and care of a gardener looking after an orchard. His clear vision of the fragility and complexity of human relationships are given expression in his writings. The title of the ballet, “The Infinite Orchard”, relates to this vision. Besides, I am firmly convinced that the work of any great artist is infinite, endless and not death-pron.

The expertise of the troupe is amazing. Everything is unified and harmonized, adaptable and sensual. The dancers have perfectly mastered Nacho Duato’s choreographic language. This production of “The Infinite Orchard” has been in the focus of many debates but even though it seems to be excessively long there are moments of extraordinary and undoubted beauty.

Duato’s distinctive style shows itself again – the beauty of a sketch and multidimensional expressivity in keeping with the modulations and accents placed by this very musical choreographer ».
Julia Martin, «El Mundo»
Duato is certainly worthy of profound analysis, even thought it may turn out to be contrary to the opinion of his devotees who are used to more direct, festive and down-to-earth stagings

The motif of the ‘orchard’ seems to be one of the choreographer’s favorite. He already staged The Fenced Orchard and now Chekhov has inspired him to create “The Infinite Orchard”(the title no doubt referring to Chekhov’s “The Cherry Orchard”). Duato visualizes the writer’s inner world as an orchard or words wh ere the language creates numerous combinations. Heard during the performance is the voice of a TV broadcaster Lev Nikolayev: the choreographer decided that the muffled and a little bit tired timbre is most suitable to convey the Chekhovian ambiance. <...>
He created what might be called ‘a structuralistic’ ballet that studies the text as one studies life and visa versa. In the meantime, he managed to avoid the coldness of structuralism. His ballet is about the sweet anguish of creating – this ‘lofty sickness’ to quote Boris Pasternak.