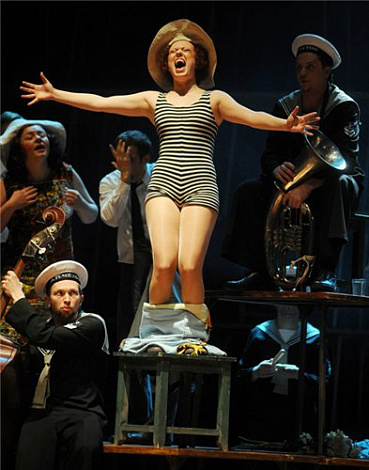 Yanka Kupala National Academic Theatre, Minsk, Belarus International Confederation of Theatre Associations Chekhov International Theatre Festival
The Premiere: Minsk (Belarus), February 20, 2009
Doubtlessly Pankov is only too well aware of the affluent history of staging Chekhov’s “The Wedding”. So in his production the story-line unfolds within the space of dreams, delusions and topsy-turvy grotesques. The huge stage opens in all directions up to the back wall and as the performance begins it immediately becomes filled with all the personages. Here the musicians get mixed with the guests at the wedding party and the lead characters of the play. Igor Stravinsky’s music suddenly gives way to the ancient Slavic folk tunes and Belarusian ritual singing. The musical score for this production also quite virtuously incorporates pop tunes of the seventies and the melodious language of the Greeks. (…)
Pankov hears the text of Chekhov’s vaudeville as music that abounds in situational and linguistic absurdities. All these verbal twists and turns, this “sil-vous-plait-je-vous-prie” gibberish, the mixture of the Russian low-middle-class lexicon and the clichés of French politeness eventually laid the foundations for what came to be known as the Russian literature of the absurd. Pankov and his band translate this stylistic mishmash into the inspired yet terrifying musical jam-session


This is a modern and perfectly complete production, a meeting place of a variety of schools of acting. This rendezvous seems to be one of the most fascinating aspects of this highly dynamic amusement show that keeps the same quick pace throughout over one hour of the running time. Young actors trying on a assortment of emotional masks (…) perform in perfect harmony with the actors of the older generation. Two eyes are not enough to fix all the colors of this theatrical palette because the action is moving continually from downstage to upstage, from stage right to stage back

A superb and modern production meeting the top European standards 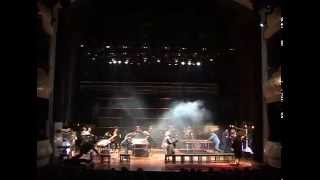