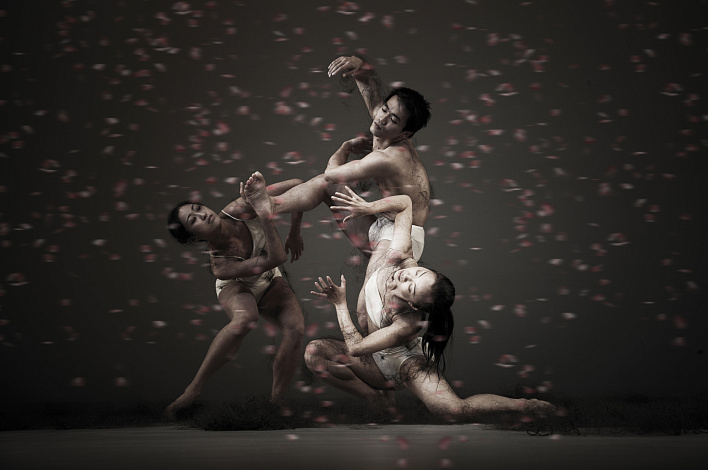 The language of dance is metaphor, not a story-line. Of all Chekhov’s works “The Cherry Orchard” is probably my most favorite one. And the most favorite scene is the finale, when we hear the distant sound of the axe cutting down the cherry trees. This sound and these scenes are truly touching. <…>
I am not trying to retell the story of “The Cherry Orchard” In my production there are no characters. It is only an impression, reminiscence: the springtime is gone and so are the good old times. And darkness falls. <…>
It is very simple to comprehend The Whisper of Flowers. Part one is the blooming, the blossom. Then dark black night falls. Naturally these are not springtime or night in the literal sense of the word. They are two stages, two states of human life. And this is what Chekhov wrote about. The ballet is performed to the music of Johann-Sebastian Bach, namely extracts fr om The Six Suites for Cello Solo. I believe this is a very interesting combination. Much is left to be read between the lines. I think that the meaning of dance is precisely reading between the lines

From Lin Hwai-min interview to the International Radio of Taiwan, April 8, 2010

For his Chekhovian meditation the outstanding Taiwanese choreographer and founder of the Cloud Gate Theatre Lin Hwai-min chose “The Cherry Orchard” or, to be more specific, one of the play’s most disturbing motifs – of fading away, of transition to nonexistence, to the world behind the looking-glass, populated by phantoms of the past. <…>
For Lin Hwai-min the orchard and its inhabitants, its angels and demons, the dead and the living, its metaphysics of light and shade becomes the central element, the predominant metaphor and the acting space. The empty space of the stage, covered all over with pink chrysanthemum petals, denotes only the beginning of the metamorphosis. The second element is the looking-glass curtain/wall in the center of the stage, set at an angle and fluctuating in the faltering light that is coming from it. Throughout the show the audience is held in the captivity of these illusions and mirages. Now a woman in white appears in the mysterious behind-the-looking-glass space. Who is she? A real person behind the glass? Or the reflection of someone unseen? Hwai-min masterly combines various kinds of reflections, using his magic “curtain” now as a translucent glass and then as the behind-theglass surface. <…>
The orchard, conceived and visualized as “Paradise Lost”, is intensely present in Lin Hwai-min Chekhovian meditations. The orchard is the space wh ere angels in white garments, the dead and the living are engaged in an intensive and endless intercourse through dance. Finally, the last but by no means the least element of the performance is Bach’s music. For quite a while this music has been part and parcel of the choreographer’s philosophy of dance and now it fills the rather somber ambience of the show with the breath of living eternity and the unending Taoist quest of the choreographer and his dancers