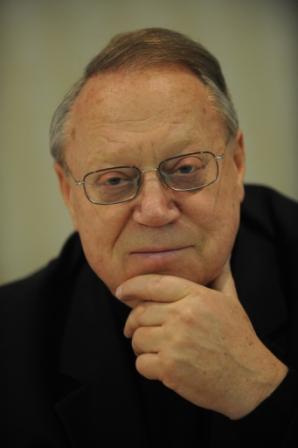 Valery Shadrin, General Director of Chekhov International Theatre Festival and President of International Confederation of Theatre Associations, is quite a remarkable personality in all senses. All his work provides convincing evidence to the effect that with all the difficult circumstances that life creates, one can do his job well, provided it is the job he truly loves and it’s important for the people and for the national culture.

His career of the theatre functionary commenced in the mid 1980-s when theatre practitioners of the former USSR elected him Organizing Secretary of the Board of the freshly established USSR Theatre Union. Creative people were rather inclined to have as one of their leaders the man who had for many years headed Moscow’s Department of Culture. In a surprising way he managed to combine the qualities that are traditionally ascribed to the Russian man but that are very rarely found nowadays. Above all, he genuinely loves theatre and theatre people although he never declares it in public. And theatre people reciprocate his affection. Significantly this applies to theatre practitioners not only in Russia but to directors, designers, producers and actors in many countries of the world for Shadrin has been having intensive contacts with them in his capacity of General Director of Chekhov International Theatre Festival.

Valery Shadrin has been initiator and organizer of many major theatre events like Festivals of German, French and Italian Theatres, Days of the Finnish Literature and Arts, Theatre and Dance Festival in Zurich, Flemish Arts Festival, tour of London Theatre of Modern Ballet, numerous festivals of national theatre abroad…

In conference with Kirill Lavrov and Oleg Efremov Shadrin was one of the ideologists and organizers of Chekhov International Theatre Festival. This happened when Russia was living through very hard times. The idea of the Festival was first put forward during the Constituent Congress of the USSR Theatre Union in 1986. It took enormous efforts on the part of the organizers to translate this idea into reality and when five years later the Festival opened for the first time it was already in an entirely different country. Shadrin’s role in overcoming all the barriers, disbeliefs and even resistance was hard to overstate. One of the papers wrote about him then: “the worse life was coming to be the more far-reaching were his fantasies aimed to refine this life…”

The launch of Chekhov Festival was also quite well-timed since by then the system of touring activities in Russia had collapsed. Festivals came to be the only available form of international theatre exchange and the sole opportunity to maintained unified theatre space on the territory of the former Soviet Union. Much owing to the Festival the theatres of the CIS and Baltic states managed to maintain professional ties, largely within the framework of International Confederation of Theatre Associations.

In the course of its relatively short history Chekhov Festival has been undergoing changes too. Initially it was oriented predominantly on the stagings by late 20th century’s great directors like Peter Brook, Giorgio Strehler, Peter Stein, Otomar Krejča… But already the program of Third Festival featured the productions by who were very well-known abroad but not familiar to the Russian audiences: Ariane Mnouchkine, Robert Wilson, Christoph Marthaler, Krystian Lupa, Tadashi Suzuki and some others.

The scope of genres represented at the Festival was expanding too. In the beginning it was limited exclusively to drama theatre. But beginning Second Festival the program started to feature choreographic and operatic stagings and a few years later it was further expanded to include theatre/circus performances and street theatre.

The decision of International Theatre Olympics Committee to hold 2001 Third Olympics in Moscow was tantamount to recognizing the Russian capital as one of the centers of the international festivals movement.

In the recent years Chekhov Festival has noticeably expanded geographically. Its programs feature productions by companies from Japan, Brazil, Canada, Taiwan and some other countries. All in all, the programs of the Festivals have featured over 500 performances. In the meantime the organizers have managed to satisfy the interests of both professionals and broad general public.

Valery Shadrin played a key role in protecting and further strengthening the international ties of International Confederation of Theatre Association that after the collapse of the USSR became legal hair to USSR Theatre Union. Shadrin has been known for his gift to establish and maintain not only good business but also truly friendly relations with his partners. Therefore theatre practitioners from all over the world eagerly respond to invitation to take part in Chekhov Festival or any other joint creative project.

The scope of Shadrin’s activities transcends the boundaries of Moscow Chekhov Festival. He acts as producer of various stagings, organizes season of Russian theatre outside Russia and national days of Russian theatre at various world exhibitions. In 2005-2006 Shadrin was general producer of the major Russian arts festival “Europalia” in Belgium.